The U.S. Academic Decathlon is A Competition You Should Compete In

Public speaking can be frightening, as can college-level courses and pushing your limits, but what if there is a way to take on these fears before entering college? The Academic Decathlon gives students the chance to excel academically and master college-level material through team competition.

The  U.S. Academic Decathlon challenges teams to dive into a theme provided, the theme can vary from science to art, teams will develop an argument to debate against other top students across the country, for medals and honor.

Participating in and winning competitions is imperative when it comes to your profile when applying to school.  The U.S. Academic Decathlon covers seven different topics, including Humanities and Math and Science, competitive subjects where competitions put you at the top.

Not only do these teams allow for learning and collaboration, but teams work closely together for a long period of time, teammates turn into lifelong friends. View this promotional video for and about students and parents of Decathletes. 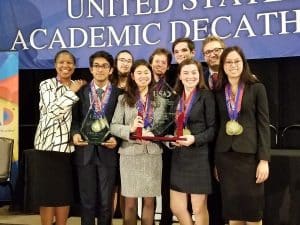 Proving that you have significant leadership capabilities presents a strong case for college admissions counselors. It is important to show you have had a genuine leadership role during your time in high school, one that was of quality and proved that you stretched yourself.

As Decathletes, you’ll learn an exciting new theme each year, themes like Russia, World War I, and New Alternatives in Energy: Ingenuity and Innovation. You’ll explore seven subjects connected to that theme, from art and science to math and economics. You’ll learn to move an audience not just with facts and rhetoric, but with confidence. And you’ll never do any of this alone. You’ll be working with a team—a team composed of students with a wide range of grades but a single shared goal.

If you’re not sure how The  U.S. Academic Decathlon fits into your plan toor is aligned with what you need to get into the college of your choice, check out the Academic Guidance page on AdmissionSight to see what top colleges are looking for.

Mission of the U.S. Academic Decathlon

The first U.S. Academic Decathlon took place in 1968 in Bolsa Grande, California.Dr. Robert Peterson first came up with the idea of creating a program like this one as a prisoner-of-war in Nazi Germany. He wanted a decathalon of students. When the program began, he made it so teams had diverse grade point averages, which is still occurring today. Dr. Peterson implemented no specialization, he wanted students to improve their weakest subjects. 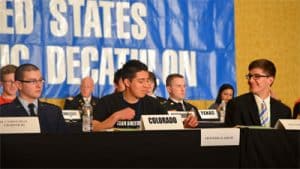 Read more in depth about the history of the Academic Decathlon here.

About the U.S. Academic Decathlon

There are five different events Decathlon participants participate in. First, two Speeches, one about the Academic Decathlon theme, and students get to choose a topic of choice. Next, participants write an Essay on how powerful it can be to argue an idea based on what you have learned and experienced. Judges will interview participants about previous experiences, goals and more.

AdmissionSight offers interview prep assistance, as well as if you’re not sure about your goals or roadmap just yet, it may be a good chance for the Academic and Extracurricular Profile Evaluation to create a customized roadmap, which will give you more insight into your goals and how to answer the judges. Decathlon participants take Tests of Knowledge in art, economics, literature, math, music, science and social studies. Finally, the Super Quiz, teams attempt to solve challenges from all subjects studied, in a live event.

In Depth of Events:

Decathletes speak for up to four minutes on any topic of their choice. (The Academic Decathlon recommends choosing early and practicing often.) Afterward, participants will be asked to speak off the cuff for up to two minutes on a never before seen topic. Many Decathletes have never given a speech before, and they cite learning to speak in public through the Academic Decathlon. Public speaking is a great way to boost self confidence, especially under pressure. How you handle yourself under pressure says a lot about what kind of leadership skills you have, and could very well be a question from admission counselors.

Next, Decathletes have 50 minutes to write their strongest paper possible. The Academic Decathlon recommends practicing outlining and writing arguments related to the Academic Decathlon subjects, excluding math to prepare. It’s important to study the theme assigned, to ensure you have enough knowledge to write about the theme.

In the interview, Decathletes have seven minutes to answer questions about themselves. Just like the Undergraduate Admissions process, it’s important for Decathletes to display personal qualities that both admissions counselors and judges want to see, it’s important to think about background, interests, and goals.

Decathletes will take seven multiple choice exams, one in each of the Academic Decathlon subjects: Art, Music, Social Science, Science, Economics, Literature, and Mathematics. Decathletes will develop better critical thinking and test-taking skills that will also help when it comes to the SAT tests, as well as AP tests which by using critical thinking skills and doing well, can score you some college credits.

Finally, the Super Quiz, Decathletes and the other 8 teammates will take turns solving multiple choice challenges, all in front of a live audience. If you make it to the national finals, you collaborate with two teammates to figure out the best answer to each question before time is up. The exact format of the Super Quiz depends on the state, but it is always the final event.

Check out the materials brochure here if you’d like to learn more about the program materials and products, such as the study aids and practice tests.

Each year, the Academic Decathlon picks a theme for everyone across the country to compete, it is new each year. The theme encompasses all seven courses. Students can participate in the Academic Decathlon multiple times over the years, allowing for more themes to master. The curriculum develops the themes at a high level to ensure students are able to expand their knowledge. 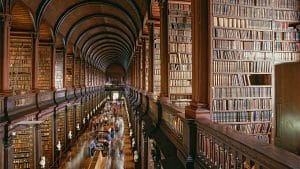 The U.S. Academic Decathlon theme for the curricular year 2020-2021 is The Cold War. Each of the subject areas are all specific general topics that focus on The Cold War:

Reach more about each of the seven curriculum topics here, as well as learn about other research competitions that may tie into the research you do while competing during the Academic Decathlon.

Teams are made up of nine high school students, from the ninth through twelfth grades and they attend the same high school. The team is made up of three honors students (3.80 – 4.00 GPA), three scholastic students (3.20 – 3.799 GPA), and three varsity (0.00 – 3.199 GPA). You can begin in the ninth grade competing in the Academic Decathlon, it’s important to start early not only to be able to compete as much as possible, but in order to prove yourself to college admissions counselors, you must start winning competitions early.

Every team member participates in all ten events during The U.S. Academic Decathlon. Scoring comes from six scores out of the nine, two honors, two scholastic and two varsity, so schools can enter less than nine students to be considered, as long as there are two of each GPA student.

Each high school submits transcripts to  The U.S. Academic Decathlon to prove eligibility of teams.

Foreign students can participate in the United States Academic Decathlon, to read more on various types of students read the eligibility guidelines here.

This competition is for students who are homeschooled, alternative schools, team alternates, and Academic Decathlon team members. You’re eligible to participate in this competition if you:

The United States Academic Decathlon aims to recruit new schools for the International Competition. International Schools that speak English can participate. The same process for team choosing applies to the international competition. 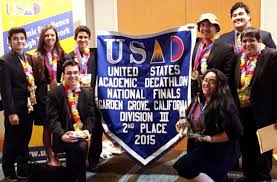 Once a year, the Academic Decathlon invites qualifying teams from every state for the finale of the Academic Decathlon season. The national competition holds ten challenging events and a championship. It’s a chance for students to utilize the skills they’ve been working towards, and compete against diverse voices while also creating bonds.

Each year, teams outside the United States are invited to qualify online for the chance to join the Academic Decathlon community in person at the national finals.

Titles to be Won

For each National Finals, there are various categories teams can win. There are four different division first, second and third place winners. There is a Rookie of the Year, a Kristin Caperton Award, a Founders Scholarship – Most Improved Student, a Norman Katz Scholarship, a B. Franklin Reinauer II Economics Priize and Edwin Reaves, Esq. Social Science Prize. (Remember, colleges are looking for high school students to participate and win National High Impact Competitions)

Check out the finalists since 2012 here.

How to Get Involved

If you are a student and you want to participate in the Academic Decathlon but your school doesn’t have a program, here is how:

If you are a teacher trying to begin an Academic Decathlon program at your school start here:

Guidelines for both students and teachers beginning a program:

There are a lot of rules to the Academic Decathlon, but the most important part is getting a team that is excited to begin. For assistance and getting the program running, contact your state director here, or other Academic Decathlon contacts here, or reach out to other schools in your area that participate for advice. 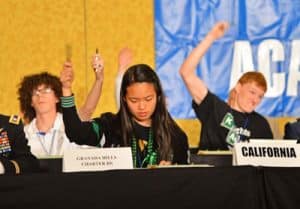 To get student and coach perspectives, visit the Academic Decathlon testimonials page to better understand the program from a participants point of view.

It’s important to challenge yourself in new ways, whether you’ve never worked in a team or debated in public. High school is the perfect time to cultivate skills and win awards, especially through a national program like Academic Decathlon. When you challenge yourself, it pays off when it comes to admissions for college and personal growth.