When applying to college, you not only need good grades and a killer essay but also extracurriculars and activities that show your interest in a specific subject matter aside from regular school classes.

At AdmissionSight we strongly believe that if you’re into Mathematics, then something that can set your application apart from others is having participated in the American Regions Math League (ARML).

Having participated in the American Regions Math League will make your college application stand out, as it demonstrates a pattern of interest in Mathematics as a career beyond just high school. Whether you win or not, participating is enough to show interest, and colleges will take notice. You need to remember that colleges look at thousands of transcripts and read thousands of essays. It’s not always easy to decide who gets in and who doesn’t. So make sure your extracurriculars set you apart.

The American Regions Math League is like participating in nationals for a sport. It’s that important. It means you were selected to represent your area at a national scale, and that is something colleges will definitely take into account when going over your admissions application.

So what really is the American Regions Math League?

ARML is often referred to as the “World Series of Mathematics Competitions.” It is prestigious and relevant to the world of Mathematics. The competing teams are made up of 15 high school students from large geographic areas (like states) or large population centres (major cities).

The annual competition takes place on the first Saturday after Memorial Day. Sadly, the competition will not take place in 2020 due to the current Coronavirus pandemic. But students are still encouraged to continue practicing, so they can apply and participate next year, and do even better. The American Regions Math League was even so kind as to upload a free PDF copy of the contest book from 2009-2014 to their website, in hopes of encouraging students to continue practicing their skills. 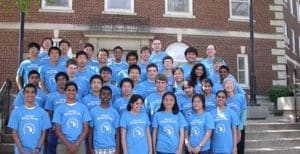 The problems the students will encounter at the American Regions Math League include math problems that have to do with algebra, geometry, number theory, combinatorics, probability, and inequalities. Calculus isn’t required, but it will surely help students to solve problems quicker.

There are two parts of the competition: one is short-based answers, and then there’s a cooperative team round and a proof-based power question (also as part of the team).

And even though the problems that students will encounter at ARML are harder than at other Mathematics competitions in the United States, that only means it is more selective and exclusive, meaning it would look better in their college application. And it’s never too soon to start planning for that.

How does this contest happen? It’s made possible thanks to the financial contributions of D.E. Shaw & Co., among other smaller contributors.

Teams are made up of 15 students each. You can bring as many teams as you want to each competition, but each team needs 2 coaches. Each team pays a fee of $400 to participate, plus room and board.

Students have to be in 12th grade or lower to participate, and they cannot have graduated high school in the prior academic year.

Students have to be selected from very defined geographic areas, and different teams’ areas cannot overlap.

You can decide how to select your team, but some suggestions to make the process easier are:

Once you have selected your team, practices take place weekly or monthly, depending on the team. Of course the closer to the competition, the more practice time that is needed.

The format of the American Regions Math League competition is based on the NYSML competition, but it’s much more difficult. The Great Plains Math League’s format was also inspired by this. 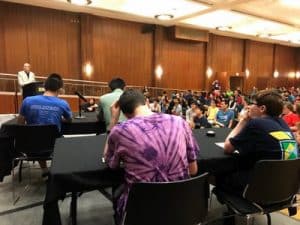 How are the points tallied up?

The teams can win up to 300 points from all of the different events. If there’s a tie, they break them by first considering the sum of the team and power rounds, then the total of the relay round.

There’s also a set of tiebreaker questions at the end to help determine the top 20 participants, who all receive a prize in cash from D.E. Shaw & Co.

The students tied for the highest scores have to answer up to three tiebreaker questions, one at a time. Whoever answers quicker (and correctly), breaks the tie.

Breaking up the math with some fun (but still including math)

Recently, a song contest has taken part as an informal event of the American Regions Math League. Each school can have some of their students perform a song that somehow relates to Mathematics. A lot of times it’s a parody, and they replace the lyrics of the song.

This gives students a chance to relax and do something outside of solving math problems, while also participating together as a team, and competing against the other participants.

When did the American Regions Math League get started?

The Creation of the International Regions Mathematics League (IRML)

The International Regions Mathematics League is an extension of the American Regions Math League. Since almost the beginning, some teams from Canada have participated in the ARML. But in the late ’80s, a team from Moscow was invited to participate, which led to teams from the Philippines, Taiwan, Macau, China, Hong Kong, Vietnam, and Colombia to participate as well.

But since the ARML is an on-site competition, and travelling can be expensive for large teams, the IRML was invented to make it easier on international teams. It is done over the Internet, so teams from different countries can participate from home. This only makes the contest more challenging and raises the bar, as it involves the best of best not just country-wise but worldwide.

The types of problems solved by students are the same as in the American Regions Math League, and there are also four events. And just as in the original competition, no calculators are allowed.

Starting in 1994, the American Regions Math League Power Contest provides a challenging group solving setting that is similar in nature to the power question from the regular ARML competition.

In the fall and spring of each year, different teams try to solve problems about a single theme or to develop a mathematical idea or theorem. The problems have to do with computations, written proofs, searches for counterexamples, and whatever else can help them with the theme.

The level is very high, and even experienced student mathematicians will be challenged. But in this case, there’s no limit to the number of students per team. The more the better to try to solve the problem in the 45 allotted minutes.

The American Regions League Local is another extension of the regular ARML and is open to middle schools, high school, and homeschooling groups.

Each school can have more than one team composed of six students. The competitions can be done among neighbouring schools, or within schools.

The ARML Local competition only takes two and a half hours to be completed, with a similar format to the regular ARML competition. It has a team around, an individual round, and a relay round.

The team coaches and the coordinators grade the different problems and submit them to the ARML website. After the scores are compiled, the winners are picked, and prizes are given away.

There are multiple different awards that students can win when participating in the competitions by the American Regions Math League. Among these:

At AdmissionSight we know that applying to college is a process that doesn’t just happen overnight. Students need to take time to decide what they want to study, explore their options, and work on their applications. Part of that is showing colleges that they’re not just their grades. They need to show they care about their potential area of study beyond what they’ve done in school.

The American Regions Math League is a chance not only to show colleges that students care about Mathematics, but it’s also a chance for them to develop their skills. They get to work with some amazing coaches, learn from their peers, work individually, and as part of a team. They get to travel and connect with students from all over the country and put their skills to the test.

That level of competition is also a great way to prepare for college. That’s where great minds get together. And to be able to shine and excel in higher education, you need to have prepared ahead of time. That’s what the American Regions League offers: a chance to help you develop the necessary skills that will make the transition to college a little easier.

So at AdmissionSight, we encourage you to go online and check out the different sites for different regions in the United States. If you’re into Mathematics, don’t waste any more time, and sign up to be a part of a team that will compete at the highest level, help you reach for the best, and prepare you for your future.

Why Choose Brown University Among...