How Big Is Stanford University?

How Big Is Stanford University?

Is Stanford A Large Campus?

The stunning 8,000-acre campus is located in Silicon Valley and is only 25 miles from San Francisco. Picturesque Monterey, Yosemite National Park, and the Napa Valley wine country are just a few hours away. San Francisco and Mineta San Jose International Airports are both conveniently close to Stanford. Located in Silicon Valley, you might wonder “How big is Stanford University?” With over 17,000 students enrolled, including about 7,645 undergraduates, Stanford is a medium-sized university. The school employs 2,288 faculty members in total.

To make a clearer picture of the answer to “Is Stanford a large campus?”, here are seven schools it is comprised of the following:

First-year students are required to live on campus, but since housing is guaranteed for the entire four years, most students decide to do so. Although some homes have one or two floors with only one gender, all freshmen live in mixed-gender housing. 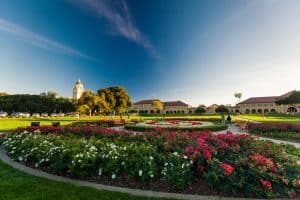 So, how big is Stanford University’s housing for students? The size of the houses varies from 30 to 170 students. Most students share a room with two or three other people. Four students may share two or three rooms in some housing arrangements.

What Are Some Famous Stanford Landmarks?

The Hoover Tower is visible from all over the neighborhood. The Hoover Institution on War, Revolution, and Peace is housed in three structures, the tallest of which is the 285-foot tower. The observation deck of the tower provides spectacular views of Stanford and the surroundings.

The Cantor Center houses a wide variety of works of art, including the largest collection (outside of the Paris Musée) of Rodin’s renowned bronze sculptures. These works of art range from Renaissance paintings to African masks.

The Main Quad’s architectural focal point, Memorial Church, is a well-known landmark and an image of the University. In honor of her late husband, Leland Stanford Sr., who helped found the University along with her, Jane Lathrop Stanford erected the church in the early 1900s. Numerous campus activities, such as choir performances, lectures, and religious and spiritual services, take place at Memorial Church.

Students have free access to both of our recreation centers on the main campus and the Redwood City Recreation and Wellness Center. Stanford also has tennis, basketball, and volleyball courts, as well as running, walking, and biking trails that crisscross the campus.

What is the area around Stanford like? The park-like campus of Stanford University, one of the most prestigious universities in the world, is near Palo Alto, which is located in the southern part of San Francisco Bay.

An interesting fact about how big is Stanford University’s influence in Palo Alto is it has gained international recognition as a cultural hotspot for travelers, trailblazers, and some of the largest technology companies in the world thanks to the illustrious pairing of Stanford University and the thriving tech industry. Palo Alto, which glitters with tech landmarks and museums, also features breathtaking natural scenery at locations like Baylands Nature Preserve. 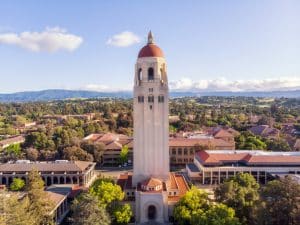 There are many places in downtown Palo Alto where people tend to congregate, including a farmers market every Saturday morning all year long. University Avenue, which connects the city center and the campus, is lined with neighborhood eateries and stores as well as the historic Stanford Theater, which honors the Golden Age of Hollywood. Downtown is home to a number of entertaining attractions, including the Palo Alto Art Center and the American Heritage Museum.

How Many People Apply to Stanford in A Year?

If you are planning to join Stanford, you should check “How many people apply to Stanford in a year?” Only 2,190 out of the 55,471 applicants who applied to Stanford for admission to the Class of 2025 were accepted, or just 3.9 percent. What’s more astounding is that 97% of accepted students enrolled in classes last fall.

The Class of 2025 at Stanford had 255 international students who represented 72 different nations, or 12 percent. Accordingly, Stanford only accepted three to four students from each country of citizenship. Women outnumbered men by a slim margin of 51 percent to 49 percent, with 18 percent of students being the first in their families to attend college. 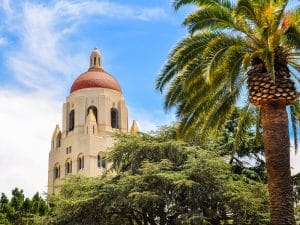 However, Stanford withholds data on the percentage of applicants who decided not to submit test scores as part of the admissions process and went on to enroll. It’s also interesting to note that Stanford decided not to disclose any information on the diversity of racial and ethnic groups in the Class of 2025. The data below shows how big is Stanford University’s admissions over the years:

What Is Stanford’s Acceptance Rate?

Sadly, Stanford won’t be making any admissions information for the Class of 2026 public just yet. For many months, not even the total number of applicants will be known. Only 2,190 of the 55,471 applications for a place in the Class of 2025 were accepted by Stanford. The university’s acceptance rate of 3.95 percent was a record low. 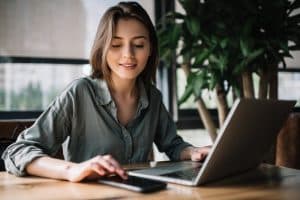 The SAT range for the majority of Stanford University applicants was 1420 to 1570, while the ACT range was 31 to 35. However, only one-fourth of accepted applicants received scores that fell within these ranges, and the remaining one-quarter received lower scores.

What Is the Average Class Size At Stanford University?

If you are interested to join this prestigious institution, you might ask “What is the average class size at Stanford university?” The student-to-faculty ratio at Stanford University is 5:1, and 68.6 percent of the school’s classes have fewer than 20 students.

How Many Majors Does Stanford Have?

Three of Stanford’s seven schools—Humanities and Sciences; Earth, Energy & Environmental Sciences; and Engineering—offer undergraduate degrees. Including major courses, writing, and rhetorical requirements, and one year of a foreign language, undergraduates must complete at least 180 units. The following list reveals how many majors Stanford has:

Even though Stanford’s School of Engineering is among the most well-known, the most sought-after majors are offered by all of the university’s schools.

The top 10 most popular majors to take into account include:

Since its establishment in 1965, the Stanford computer science program has maintained a reputation for academic excellence and technological innovation. The program focuses on investigating computer science-related topics, including how well students can use the theory, abstraction, design, and implementation processes that define the field to address issues in the field.

By working one-on-one with a private computer science tutor like our own Brian, high school students who are aware that computer science is one of their passions can start honing their skills well before college. Students who major in computer science frequently pursue careers as software engineers, web developers, data scientists, product managers, and information technology specialists.

Students considering a career in the life sciences shouldn’t discount Stanford Human Biology, one of the university’s most well-liked majors. One of the most popular undergraduate majors at the college, about 50% of Human Biology students go on to major in medicine.

A renowned marine biology program is also offered at the institution, and it is equipped with cutting-edge labs and a sizable library of materials in the field. Professors of biological sciences, researchers, doctors, anthropologists, and social scientists are among the top jobs for human biologists.

The intersection of engineering, business, and public policy is where the Management Science and Engineering major excels. The department’s goal is to improve technological, economic, and social system design, management, operation, and interaction through education and research.

This well-liked Stanford major offers the following career options: business analyst, management consultant, data analyst, operations research analyst, and budget analyst Not only is Symbolic Systems one of the most well-liked majors at Stanford, but it’s also one of the most distinctive. Computer science, linguistics, mathematics, philosophy, psychology, and statistics are just a few of the subjects that are integrated into the program.

During a visit to the major’s laboratories, Facebook CEO Mark Zuckerberg claimed that some of Facebook’s brightest employees are from Symbolic Systems. A Stanford symbolic systems major has a variety of career options given its interdisciplinary nature, including: Program manager, product manager, software engineer, strategic consulting, and financial analyst are among the professions.

If students want to engage with topics like public policies, governance structures, and institutional design, they should take a look at Stanford’s well-known political science major. The department offers a wide range of classes taught by eminent authorities on both domestic and global politics. A political science major at Stanford might pursue one of the following careers: political reporter, social media manager, lawyer, social worker, or campaign manager

The cognitive science major is one of Stanford’s most popular majors for students who are interested in science. Students have the option to take classes like Introduction to Perception, Applied Machine Learning, and Data Mining and Analysis through this program. Technical Writer, Human Resources Coordinator, Employment Counselor, Clinical Research Coordinator, and Instructional Systems Designer are some possible career paths.

It should come as no surprise that Mechanical Engineering is one of Stanford’s most sought-after majors given the reputation of its engineering program. Applied mechanics, biomechanical engineering, computer simulations, design, and energy science and technology are all highlighted in the program. Students with this major may pursue careers as follows:

The Electrical Engineering major is one of Stanford’s best. Three disciplinary areas make up the curriculum:

Additionally, there are a number of interdisciplinary elective options so that students can broaden their horizons and collaborate across different departments. Controls engineers, design engineers, test engineers, communications engineers, and systems engineers are some of the most sought-after career options for this major.

Last but not least, one of Stanford’s most sought-after majors is international relations. The program is an interdisciplinary major that examines how state and non-state actors, including the United Nations, the World Trade Organization, the International Monetary Fund, the World Bank, Amnesty International, and other NGOs, interact in international politics. Career options include those as a politician, diplomat, economist, foreign affairs analyst, and intelligence specialist.

What Are My Options for a Major at Stanford?

Any student may find it difficult to decide on a college major, but at Stanford, the variety of top-notch programs may make it seem even more difficult. It’s acceptable to be unsure of your area of focus when you first enroll in college because, at the majority of colleges, students can change their major up until their sophomore year. Spend some time considering your future career goals, your favorite academic subjects, and the projects and assignments you’ve done well so far. You should also look into how big is Stanford University, its admissions process, and read some success stories from Stanford University admits.

AdmissionSight can help you become one of those admits with our experience in the college admissions process. You can work together with AdmissionSight’s experts on how to boost your application and make your way to your dream school. 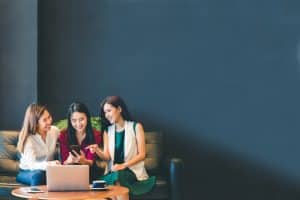 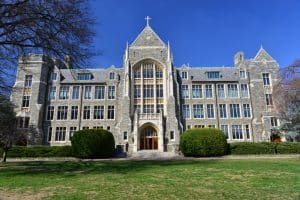 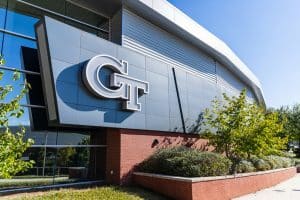 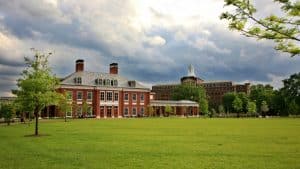 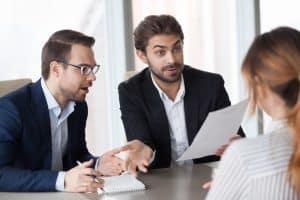 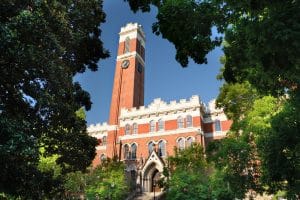 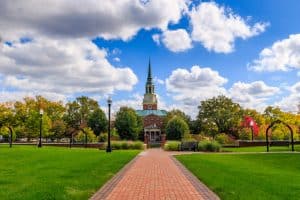